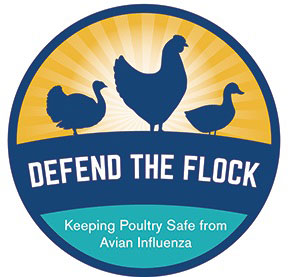 Iowa poultry producers are reminded to be vigilant for signs of avian influenza as wild bird populations are beginning their fall migrations and could bring perilous hazards with them.

Doctor Jack Shere, a veterinarian with the U.S.D.A.’s Animal and Plant Health Inspection Service, says farmers need to be watchful because this is the time of year diseases can spread as wild ducks and geese head south for the winter.

“Look to see if there’s any reduction in feed consumption, any decrease in egg production, any birds that just don’t act right that seem weak or separate themselves or just don’t act like they normally do,” Dr. Shere says. “Those are signs that things are different in the flock and they should do what they can to get that flock tested.”

During the 2015 bird flu outbreak, cases were confirmed at 77 Iowa poultry operations in 18 counties. It resulted in the destruction of more than 31 million birds and an economic loss to the state of $1.2 billion dollars. With the goal of preventing a repeat, Shere offers tips for producers on maintaining poultry health.

“Make sure that everything you bring into the flock is cleaned and disinfected,” Shere says. “Change your boots. Change your coveralls. Don’t be around other people’s poultry and then go deal with your poultry because you could bring any infectious disease from them to you. Also, keep the wild birds out of your facility. Clean up feed spills, those kinds of things.” A strain of bird flu that’s deadly to humans killed dozens of people in China earlier this year. Shere says the U.S.D.A. is prepared should migrating wild birds bring a killer strain to the U.S.

He says that’s why vigilance is so important.Shere says, “We look at the 21 biggest poultry states and we test wild birds throughout the year in those states to make sure we have an early warning notice if this virus has changed, if we have a new virus, that we have an awareness and we can pick it up.” The agency’s Animal and Plant Health Inspection Service has launched “Defend the Flock,” an online program with tips on how to protect fowl in commercial and backyard operations.