You are here: Home / Agriculture / Iowa groups join ‘Clean It Up Tyson’ campaign 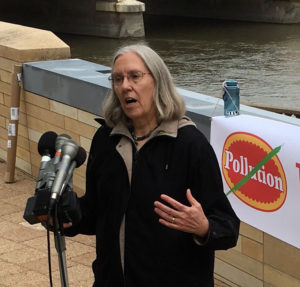 “Unfortunately, the meat industry is currently driving production practices of feed grains that pollute our waterways with excess fertilizer pollutants,” said Elise Peterson-Trujillo, a Des Moines-based organizer for Mighty Earth, an environmental group headquartered in Washington, D.C. “Tyson Foods is the company most responsible for driving these polluting practices.”

Tyson is the country’s largest meat company, producing about one out of every five pounds of meat purchased by American consumers. Susan Heathcote, the water program director for the Iowa Environmental Council, said if Tyson required producers to plant oats or other cover crops on harvested corn and soybean fields, nitrate run-off could be reduced by as much as 40 percent.

“We really want to continue to make sure that we have a productive agricultural landscape,” Heathcote said today. “It’s a big part of our economy, but we need to do that in a way that doesn’t add to the water quality problems, especially nitrate in our drinking water is a big issue in Iowa.”

Heathcote spoke this morning during a news conference in Des Moines that was organized by the “Mighty Earth” group. Des Moines Water Works CEO Bill Stowe also spoke at the event, which was held on a Des Moines River bank.

“Look out at that water,” Stowe said. “It looks more like cappuccino than it does drinking water. That’s because it has suspended solids. A lot of soils and a lot of nutrients associated with the soils are coming into our water because of land practices, but it’s also full of bacteria and the bacteria, to a large extent, is coming from livestock rearing.”

The “Clean It Up, Tyson” campaign was launched in August. A spokesperson for Tyson Foods said this summer that the company doesn’t agree with Mighty Earth’s “characterization” of Tyson’s operations, but “shares its interest in protecting the environment.”

The company issued a new statement Thursday morning, accusing Mighty Earth of “making misleading claims about our company, which is committed to continuous environmental improvement. Their focus is pollution from crop production, but they overlook the many ways crops are used including human consumption and biofuel.”

A Tyson spokeswoman said the company is “collaborating with a variety of stakeholders, including public interest groups and trade associations” because it will take more than “just one company” to achieve “real change”