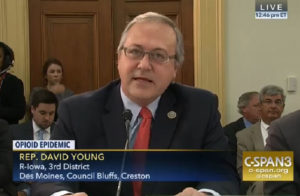 Congressman David Young is touting the efforts of a small southwest Iowa town to battle drug dealers as an example while Congress considers ways to help communities tackle the opioid epidemic.

Young testified before the U.S. House Committee on Energy and Commerce on Wednesday afternoon. He told how residents in the tiny Adair County town of Bridgewater are banding together to run out drugs and crime.

“As residents started to clean up their town, they were met with hostility and retaliation from drug dealers and users,” Young says. “Leaders of the ‘Take Back Bridgewater’ movement were run off the road, swerved at by those who wanted to protect the status quo. A number of other incidents occurred, but the residents pressed on. The citizens of Bridgewater will not surrender.”

Residents in the town of 200 held forums with drug counselors, law enforcement, state and local legislators, and other individuals who offered to help and started making a difference.

“As neighboring communities saw what the residents of Bridgewater were doing, they wanted to do the something in their communities,” Young says. “Leaders from towns across southwest Iowa often discuss strategies together to protect their neighbors. That is what Iowa is all about, neighbors helping neighbors, communities helping communities.”

Residents got fed up, Young says, after seeing an uptick of crimes – theft and vandalism – which traced back to drug users and dealers coming to town. Empty houses became drug houses, powered by gas and generators, which led to at least four houses in the small town burning to the ground. Activists with Take Back Bridgewater met in a church basement this week to plan out a seasonal fundraiser that will benefit their nonprofit group.

“They will be going throughout southwest Iowa to sell Christmas wreaths to adorn the doors of homes throughout the region,” Young says. “Residents will use these funds to take back their community. Bridgewater will not turn a blind eye to opioids and drugs in their community.”

Young, a Republican from Van Meter, says a “one-size-fits-all program will not save as many lives as a solution tailored to each community which has the buy-in of its residents.” According to the Centers for Disease Control, the opioid crisis was responsible for the deaths of 146 Iowans in 2016 and nearly 30,000 people nationwide. The CDC also reports that every day, about 90 people suffer opioid-related deaths.