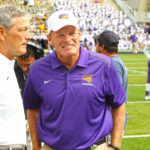 The University of Iowa has added a home date with Northern Iowa to complete its 2020 football schedule. The Hawkeyes and Panthers will open the season Saturday, September 5, 2020, in Kinnick Stadium.

With the addition of Northern Iowa , Iowa has also announced the movement of the 2020 nonconference game against Northern Illinois from September 5 to September 26, also at Kinnick Stadium. The Hawkeyes also host Iowa State on September 12, as part of the Iowa Corn Cy-Hawk Series. Iowa opens Big Ten play at Minnesota on Sept. 19, 2020.