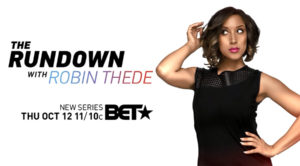 An Iowa native’s once-a-week national TV show debuts tonight at 10 p.m. Iowa time. “The Rundown with Robin Thede” will air on the BET Network. During a recent appearance on Comedy Central’s Daily Show, Thede said her show will cover pop culture and politics.

“I just want to know what R. Kelly’s doing in his basement…It’s important journalism,” Thede said as the studio audience laughed. “…I also want to know what Trump and Jeff Sessions are doing, so I think we can care about both.”

Thede graduated from Northwestern University with a degree in broadcast journalism. She has been the head writer for Comedy Central’s “Nightly Show” and “The Queen Latifa Show.”

Thede was born in Spencer and grew up in Davenport. Thede’s mother, Phyllis, is a member of the Iowa House, representing Davenport and Bettendorf, and her dad, Dave Thede, is a teacher at Davenport’s Mid-City High.