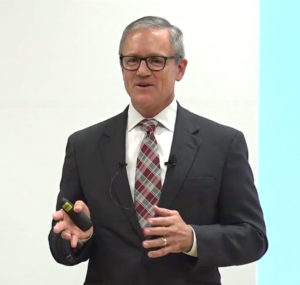 The third presidential finalist to visit Iowa State University’s campus is currently the provost and executive vice president at the University of Central Florida, Orlando.

Dale Whittaker has a background in agriculture in positions at Purdue and Texas A&M and he says ISU can play a key role in the country and the world.

“Iowa State will be a leader to end hunger and create a future that can be sustained with our population,” Whittaker says. He says addressing the hunger issue is one way the school can take what it does well and become better. “When you want to aspired to a future, you have to build on your strengths,” Whittaker says.

He says Iowa State is better equipped than any institution in the world to address world hunger, and says the school will need strong partners to do that. Whittaker also talked about students and says while student graduation rates and retention are important — it is more important to ensure there are students from across the economic spectrum.

He says it is important to ensure that those at lower economic levels get a college education, because once they do, it move their families forward. “There’s areas where Iowa State has degraded and Iowa does much less well. And that’s on the number of families here from the lowest part of the income population,” Whittaker says.

All of the candidates have been asked about diversity and how they would deal with those issues on campus. Whittaker says first of all he believes inclusion will always win, and secondly, civil debate is important.

The fourth and final candidate for the president’s job is Wendy Wintersteen, the current dean of the College of Agriculture at ISU. Wintersteen will hold her public forum this afternoon from 4 to 5 p.m.

You can find out more about each of the candidates on the ISU presidential search page.