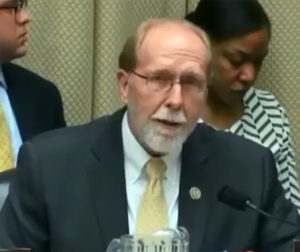 Iowa Congressman Dave Loebsack is co-sponsor of a bill headed to the president’s desk that would coordinate the federal response to a disease estimated to cost the U.S. more than $322 billion a year. The bill would create a new public-private commission on diabetes.

“Passage of this legislation will help the nation undertake more pro-active and innovate approaches to diabetes and its disease complications,” Loebsack said during remarks on the House floor.

Loebsack, who is a Democrat from Iowa City, co-sponsored the bill with a Republican congressman from Texas. The bill cleared the U.S. House by a voice vote earlier this week. If President Trump signs the bill, the new National Clinical Care Commission would be charged with eliminating duplication and conflicts within federal agencies that deal with diabetic patients and research about the disease. The commission is to come up with ways to speed up federal approval of devices and medications for diabetics, too.

“The work of the commission will help improve the lives of the tens of millions of Americans living with diabetes,” Loebsack said, “while simultaneously beginning the process of reducing the staggering impact of diabetes and its disease complications.”

According to the latest estimate from the Iowa Department of Public Health, 42 percent of Iowa adults have diabetes or prediabetes. Blood sugar levels are elevated in people with prediabetes, but those levels are not yet high enough to classified as type 2 diabetes.