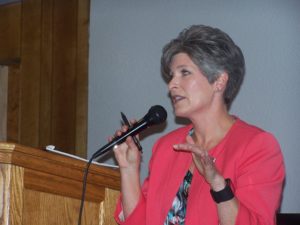 “We should know the administration’s decision, somewhere between the 20th and the 30th,” Ernst said. “I have been on calls with Seema Verma. I just talked to her last week. We’ll continue to push just how important this is to Iowa.”

Verma heads the Centers for Medicare and Medicaid Services. That’s the federal agency that must grant a waiver for the state’s plan to help 72,000 Iowans buy individual insurance policies for 2018.

“We may get all the measures approved, maybe not all of them,” Ernst said. “But one way or another, we expect that we’ll see a difference for Iowans.”

The state’s insurance commissioner is asking for permission to redirect federal subsidies to ensure younger, healthier people buy insurance — and send more of ObamaCare subsidies to two insurance companies to cover the costs of care for older, sicker individuals. If the waiver is granted, Medica and Wellmark have said they’ll sell individual policies to Iowans. Without the waiver, an estimated 20,000 Iowans will be unable to afford to buy health insurance next year.

Ernst said she’s still hoping a bipartisan effort in the U.S. Senate can come up with a wide-ranging health care reform measure.

“We have to correct the deficiencies out there,” Ernst said. “We find a way forward. It’s going to have to be bipartisan at this point.”

GOP efforts to repeal and replace ObamaCare have failed to get the support of enough Republicans in the Senate to pass.

Ernst made her comments Saturday after a townhall meeting in the northwest Iowa community of Brunsville. About 50 people attended the event and Ernst answered questions about a variety of topics, including health care, immigration policy and legalizing gun suppressors.