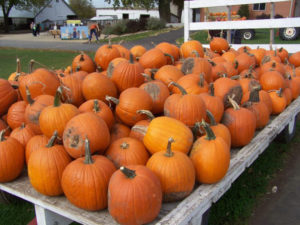 A northwest Iowa pumpkin grower says it appears this year’s harvest is a big one.

Dave and Helen Huitink have been growing pumpkins for the past 28 years on their farm north of Orange City.

“The pumpkin crop looks real good,” Dave Huitink says. “They can withstand the dry pretty well. Now, I thought we maybe overdid it a bit this year, but they look really good out there.”

“The Jack-O-Lantern-sized pumpkins we are finding are really big this year,” Huitink says. “Man, I’ve got people going out to the patch coming up with 50 to 60 pound pumpkins which we haven’t seen most years where 40 pounds would be the top ones. The giant ones — we’ve got people hauling out 130 pounders.” 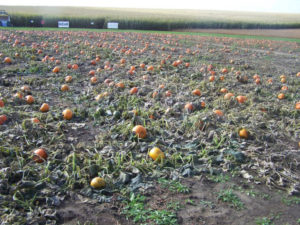 But Huitink is worried his bumper crop may be left in the field, as customer traffic has been down due to the weather.

“This fall’s been a real challenge,” Huitink says. “We’ve been getting rain all the time and that’s really kept our crowds down as far as people being able to get here or enjoy the day. We need some sunshiny Saturdays is what we need.”

Nearly three decades ago, the Huitink family started “Pumpkinland” after someone stopped at the farm and asked if they could buy some of the pumpkins growing in a patch by the family’s garden.

“The next spring, the kids said: ‘Hey, let’s plant some more pumpkins,’ and it’s probably been growing ever since,” Huitink says. “…Now the kids are all grown and gone and we’ve still got Pumpkinland.”

Pumpkinland also features a corn maze, an animal petting zoo, a craft store and home-made baked goods. “Destination” pumpkin farms have popped up around the state over the past few decades, part of an “agri-tourism” trend. The most recent statistics from the U.S.DA. indicate there were nearly 400 pumpkin farms in Iowa in 2012.

The top pumpkin producing state is Illinois. More than 90 percent of the canned pumpkin sold in the U.S. comes from pumpkins raised in Illinois.