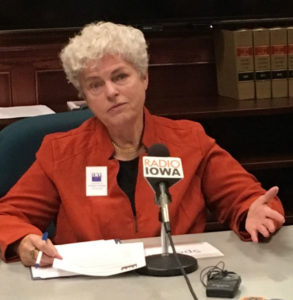 Betty Andrews, president of the Iowa/Nebraska NAACP, said she’s worried the rules will make it harder for groups like hers to register new voters.

“I have great concern about that,” Andrews said.

One proposed rule will remove people from voter registration rolls if they’ve been called to jury duty, but notified the court that they couldn’t serve because they are not a citizen. Connie Schmett of Clive, a long-time GOP activist, praised the move.

“We simply can’t allow our laws and our elections to be tainted,” Schmett said.

“Please do stick with your guns and hold people accountable to prove that they really are citizens of the United States before they are allowed to vote,” Hiscox said.

Others argue becoming a citizen often takes years and a person who declines service on a jury one month may take the oath of citizenship the next. Joe Henry of the League of United Latin American Citizens said the number of registered Latino voters in Iowa has doubled in the past decade.

“Many of our members are lower income. They’re not going to be able to understand these rules,” Henry said. “…Clearly, this seems to be a ploy to restrict the vote within our community.”

Staff from Secretary of State Paul Pate’s office say at least two specific rules to implement the new law are in a state of flux and will be redrafted by this Friday.

“We believe the rules should be as clear as possible to make sure that we are protecting the voting rights of all Iowans,” said Daniel Zeno, an attorney with the American Civil Liberties Union of Iowa who was the first to testify at the hearing.

About 100 people gathered outside the small conference room where the hour-long hearing was held, chanting their opposition to the new election law. The law was passed this spring by the Republican-led legislature and approved in May by former Governor Terry Branstad.