You are here: Home / Agriculture / Reynolds to personally lobby Pence and Pruitt on RFS ruling (AUDIO) 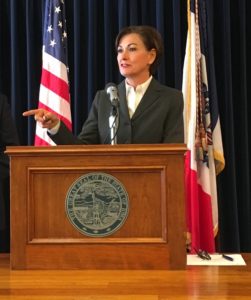 Governor Kim Reynolds is flying to Washington next week to meet face-to-face with Vice President Pence and the head of the EPA to ask that “commitments” on the Renewable Fuels Standard be fulfilled.

President Trump promised to be a bio-fuels booster when he was running for office, but EPA Administrator Scott Pruitt has proposed lowering next year’s federally-mandated production levels for biodiesel and cellulosic ethanol.

“Administrator Pruitt is somebody that I need to keep talking to,” Reynolds said, “as well as the president and vice president.”

“When they were in the state, both Administrator Pruitt and the president, you know, they made a commitment to the RFS and renewable fuels,” Reynolds said.

Pruitt told Radio Iowa during his visit to Iowa this summer that he doesn’t want the EPA “being used” to spur expansion of biofuels facilities. According to Pruitt, “the markets haven’t demonstrated” current infrastructure exists to meet higher production levels than his agency proposes.

Reynolds today said “the whole intent” of the Renewable Fuels Standard is to spur growth.

“I’m going to keep working it every day until we get the decision that we’re hoping for and that we want,” Reynolds told reporters during her weekly news conference.

Reynolds said President Trump “made it very clear” during an energy meeting at the White House this summer that he is “very supportive of the renewable fuels industry.”

“They need to follow through with what they told us when they were campaigning and what they promised when they said they would support the Renewable Fuels Standard,” Reynolds said, “and we’re not going to let up.”

During her D.C. visit next week, Reynolds also plans to press Trump Administration officials to approve Iowa’s plan for ensuring 72,000 Iowans can buy private health insurance policies next year. Without a federal waiver, premiums will rise so precipitously an estimated 20,000 Iowans will be unable to afford to buy a policy.