You are here: Home / Business / Board of Regents approves name change for ISU College of Business 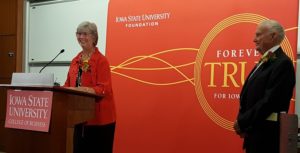 The board that governs the three state universities has unanimously approved re-naming the Iowa State University College of Business for a donor who’s giving millions to the school. It’s the first “named” college on the Ames campus according to interim ISU president Ben Allen.

“Iowa State alumus Jerry Ivy and his wife, Debbie, have made a transformative $50 million commitment to the ISU College of Business,” Allen said today, “the largest commitment ever to the college.”

Jerry Ivy is a 1953 graduate of Iowa State. He and his wife, Debbie, are the owners of Auto-Chlor. Their California-based business sells cleaning supplies to food service companies and health care providers as well as hotels and motels across the country.

The couple’s $50 million gift to ISU’s College of Business will be placed in a permanent endowment. “Maybe most importantly we should thank the people who taught at Iowa State in the 1950s because the experience of the staff and faculty who were there because the donor loved and loves Iowa State because of his experiences,” Allen said. “So I thank all of them, but most importantly I thank, of course, Jerry and Debbie Ivy.”

Jerry Ivy earned a degree in industrial administration. “If you wonder what that degree means, that was a precursor to the College of Business,” Allen said.

The couple’s $50 million gift will be placed in a permanent endowment and Allen says it will help finance more student scholarships and will boost faculty salaries so ISU can compete for top talent. Enrollment in ISU’s College of Business has grown 40 percent in the past five years.