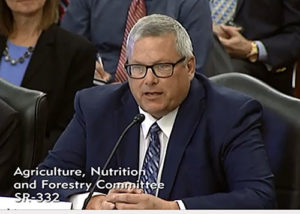 The U.S. Senate Agriculture Committee today approved the nomination of Bill Northey to become a top official in U.S. Department of Agriculture. The 58-year-old Northey, a Republican from Spirit Lake, appeared before the committee earlier this month.

Northey has been Iowa’s Secretary of Agriculture since 2007. On September 1st, President Trump nominated Northey to become Undersecretary for Farm Production and Conservation in the USDA.

The nomination is now subject to a confirmation vote in the full senate. It’s unclear when that vote will happen.