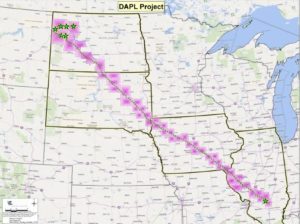 The company that built the Dakota Access oil pipeline that runs diagonally across Iowa, from the northwest to the southeast, is making donations to emergency responders in every county the pipeline crosses in Iowa and three other states.

Futch says, “In recognition of our dedication and our commitment to operate our pipelines in a very safe and regulatory-compliant and reliable manner, one of the things that’s very important to a system like that is a very close working relationship with first responders and emergency responders.”

The pipeline crosses 18 counties in Iowa and also carves a path across Illinois and North and South Dakota. The news conference was held in South Dakota and Futch says they want to be good corporate partners with every county the pipeline touches.

“Operationally, it can run at full capacity but it’s not fully subscribed by shippers yet,” Fry says.

The company is also giving the state of North Dakota 15-million dollars for protest-related expenses.