Another tweak has been made to official state tax predictions and it likely means cuts will have to be made in the current state budget.

“It’ll be a combination of looking at what’s the best approach, but we will need to make somewhat of an adjustment,” Iowa Department of Management director Dave Roederer told reporters earlier this afternoon.

Roederer is the governor’s top advisor on budget matters. He is also one of the three members of the Revenue Estimating Conference. The panel met this afternoon and reduced its official prediction of state tax collections in the current budgeting year. If that prediction holds through December, it means at least $35 million would have to be cut from the state budget. Governor Reynolds will review all the information and “likely” make a recommendation to legislators in January, according to Roederer.

“It’s never easy, budgeting,” Roederer said. “Frankly, it should never be easy because we’re dealing with taxpayers’ money. If it becomes too easy, that means we’re collecting too much money from taxpayers.”

Roederer said there is “modest” growth in Iowa’s economy, but there are “very real” negatives, like a flailing farm sector and the threat of a trade war on the horizon. David Underwood, a retired business executive from Mason City, also serves on the Revenue Estimating Conference. Underwood said he sees plenty of “help wanted” signs “all over the place,” but there aren’t enough skilled workers. 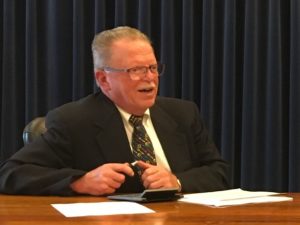 “That continue to be one of the drags on our growth,” Underwood said during today’s meeting.

Underwood also said while it appears farmers are having a good harvest, he’s not sure that will yield a major turn-around in farm income.

“I still see the farm lenders, their crisis teams are still working and spending a lot of time working with the farmers that are struggling to figure out how to pay and how to finance next year’s crops as well,” Underwood said. “…There still are farmers that are in trouble, not as bad as the last time we had a collapse in the farm economy, but enough that the lenders are concerned.”

The governor’s budget director said a long-standing hiring freeze is in effect in state government and agency directors understand they must pinch pennies. Democrats say the state faces “big challenges” because Republican Governor Reynolds and GOP lawmakers have made poor budget decisions. State Representative Chris Hall — a Democrat from Sioux City — is calling for an immediate hike in the state minimum wage, a move he said would spur income growth for individuals and boost state government income tax collections.

The Revenue Estimating Conference prediction for the current year’s tax collections was reduced by $133 million during today’s meeting. The budget the state is currently operating under has $98 million set aside as an “ending balance” that’s not designated for spending. It means once that $98 million is used to cover expenses, at least $35 million dollars more would have to be trimmed to put the state budget in balance.