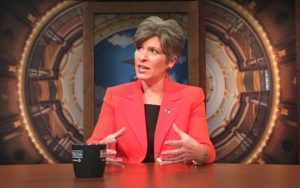 “I do think that we’re sitting in a very good position now,” Ernst said. “One thing that I insisted on when I was working through the negotiations with the EPA administrator Scott Pruitt and the White House was that we get those assurances in writing, that way there is no messing around with this. We have it in black and white what the administrator has told us in private what he would do.”

Last night’s letter from the EPA Administrator is “the clincher” on this debate over next year’s federal ethanol and biodiesel mandates, according to Ernst.

“We feel good about where we are, however I have reminded people we always need to be vigilant,” Ernst said. “It doesn’t matter what administration or where we’re at, there’s always going to be naysayers when it comes to the Renewable Fuels Standard.”

“(Pruitt) needed a little motivation, let’s put it like that,” Ernst said.

Governor Reynolds spoke by phone with President Trump on Wednesday and Bloomberg News reports Trump then told his EPA Administrator to “back off” on any plan that would reduce federal mandates for corn-based ethanol and biodiesel, which is made with soybeans. Grassley organized a meeting in his senate office this week so Pruitt could hear directly from upset Midwestern senators. Ernst used her power as a member of a senate committee to block a vote on an E-P-A official who would implement the RFS if confirmed by the senate.

“They have nominees that they badly want coming through that committee,” Ernst said. “We do have the leverage and I was able to utilize that leverage to make sure we got those assurances not just in private, but in writing.”

Ernst made her comments during taping of Iowa Public Television’s “Iowa Press” program which airs tonight at 7:30. After the taping, told a group of reporters she considers Pruitt’s letter to have resolved the debate over 2018 biofuel production levels.

“I think this is the clincher,” Ernst said during a news conference in Johnston.

Ernst indicated she and other senators were negotiating last night with the White House and the EPA about what should be said in Pruitt’s letter.

“Because we’ve been given assurances before, but no follow through,” Ernst said. “Well, now we have a letter that outlines specifically what EPA’s actions will be.”

In the letter, Pruitt promised “to act consistent with the text and spirit” of the Renewable Fuels Standard.

(This post was updated at 1:29 p.m. with additional information.)