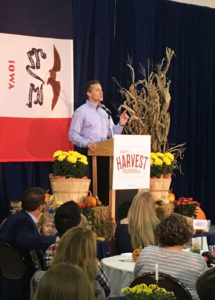 Missouri’s first-term governor, a former Navy SEAL, has spurred speculation about his presidential prospects with an appearance in Des Moines over the weekend.

“He’s in Iowa on a Saturday night. 2024 may not be as far away as we think,” said Karen Fesler of Coralville, a key organizer for Rick Santorum’s 2012 and 2016 Iowa Caucus campaigns.

Fesler was one of several hundred Iowans who heard Eric Greitens speak at a fundraiser for fellow Republican Governor Kim Reynolds. Greitens credited Republican governors around the country for  “getting things done,” but he came to a different conclusion when it comes to congress.

Greitens drew pronged cheers from the crowd of Iowa Republicans when he referred to his recent Facebook post about National Anthem protests.

“When patriots give their lives for this country, their caskets are covered in that flag,” he said. “We have an obligation to see that their values of service and sacrifice, to see that their values of honor and courage and patriotism live on and that is why it is so important to have not have not just elected officials, but also cultural leaders like Kim Reynolds who are willing to stand up for military families and for patriotic values.”

Steve Scheffler is one of two Iowans who serve on the Republican National Committee and he gave Greitens high marks after that speech.

“He’s sharp, dynamic I just enjoyed every word he had to say,” Zumbach said. “He’s on a mission and I appreciate people who have a plan and execute that plan…I was quite impressed.”