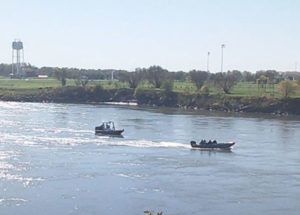 Search boats on the Missouri River.

Northwest Iowa authorities confirm the three bodies recovered from a submerged car are those of a missing Sioux City family.

Officials say 53-year-old Salomon Medina-Zavala, his 43-year-old wife Angelica Gonzalez and their 17-year-old daughter Vanessa Medina-Gonzales were found in the car pulled from the Missouri River.

“We just received word from the medical examiner that he’s conducted an investigation,” Sioux City Police Lieutenant Pat McCann said today. “At this time he’s determined the cause of death for the three individuals were the result of drowning.”

On Monday of last week, the family was seen at a Walmart about an hour before witnesses saw their 2001 Honda Civic plunge into the river. Authorities have not determined who was driving the car when it went into the river and McCann said there are no indications any of the victims suffered any other injuries.

“Preliminarily, to the best of our knowledge, it was determined that it did not appear to have any trauma and that the death result was of drowning,” McCann said.

The car was about 20 feet deep in the river when a diver attached a cable to the vehicle Saturday. A truck then tugged the car onto the shore.