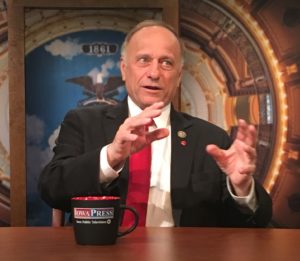 Republican Congressman Steve King was in California last week to see prototypes for the wall along the southern border.

“I thought the prototypes were pretty fancy and I thought that they were expensive,” King told Radio Iowa.

King, a former contractor, praised the workmanship, but King said the 30-foot-tall sections are not “conducive” to a construction zone that will be hundreds of miles long.

“The top 15 feet costs more than the bottom 15 feet because you have to build the structure into the foundation that’ll stand up against the wind loads and all of the other forces that are out there,” King said. “I’d say instead: ‘Let’s bring a 15-foot wall, put some wire on top and we can build it a lot cheaper and a lot faster,’ but none of these designs are conducive to an effective construction that can build, say, a mile a day.”

Congress has not yet approved funding for completing a wall along the southern U.S. border, but six construction firms were chosen in August to build eight examples of what they would erect if chosen to build the barrier. King has asked for a meeting with President Trump to discuss his concerns about the prototypes.

“I’m glad the prototypes are up. The workmanship is terrific. The people are following through on their contracts, but I have a different view on how expansive this should be,” King said. “A 30-foot wall is excessive, in my view.”

The government is spending $20 million on the prototypes. Erecting a wall along the southern border was one of the primary promises Trump made during the 2016 campaign. King has been calling on Trump to appoint someone to oversee the project.

“I want somebody that’s looked at the plans, that understands the costs and knows the terrain, that can do the acquisition and understands the politics of trying to get it funded,” King said.

There’s some discussion of linking funding for enhanced border security with providing some sort of legal status to young adults who were children when their parents brought them into the country illegally. However, Democrats in congress and some Republicans oppose more construction of permanent barriers along the southern border.