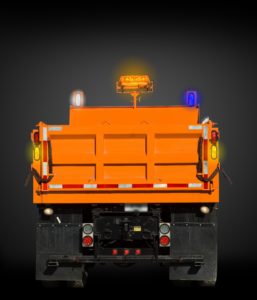 Iowa Department of Transportation officials say adding blue and white lights to a snow plow greatly reduces the chance of a crash between the plow and other motorists on the road.

Craig Bargfrede, the DOT’s winter operations administrator, says a pilot project launched two years ago involved adding the blue and white scheme to plows in the Des Moines area. “And we’ve basically seen a huge increase in the amount of hours between crashes, meaning the lights have made a significant difference in crash avoidance,” Bargfrede said.

According to Bargfrede, the blue and white lights do a better job of grabbing the attention of motorists approaching a plow. “That combination is able to cut through the fog that is created by the truck, so people can see those lights further away and identify there is a truck up ahead,” Bargfrede said. The plows involved in the pilot project still have an amber rotating light, but there are also flashing, rear-facing blue and white lights on the truck.

The data collection is currently slated to continue through this winter, but the DOT plans to ask lawmakers to bypass the final year of the pilot project. “We’re actually recommending that we basically eliminate the third year of pilot and they give us the authority move forward with outfitting our entire fleet with the blue (and white) light and amber,” Bargfrede said.

Adding the new lights to roughly 900 plows across the state is definitely worth the expense, according to Bargfrede. “For the amount of safety that we’re getting by (adding the lights), it’s not that expensive,” Bargfrede said.

A snow plow typically travels at 20 to 30 miles per hour, so most crashes involve vehicles – traveling at much higher speeds – hitting the plows from behind.