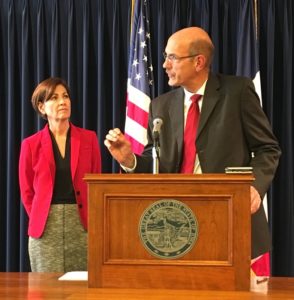 Iowa officials have withdrawn the state’s request for a federal waiver to adjust the federal health care law rules and help as many as 72,000 Iowans buy individual insurance policies for 2018.

Governor Kim Reynolds today said the U.S. Treasury Department was “several weeks away” from calculating the state’s financial commitment to the plan, plus Reynolds said ObamaCare is too rigid and state officials, ultimately, lacked the flexibility to make any alternative work.

“We do have Medica as a fall back that will provide coverage in all 99 counties, but what we continue to see with ObamaCare is skyrocketing premiums and people can’t afford that,” Reynolds told reporters this afternoon.

State Insurance Commissioner Doug Ommen estimates as many as 22,000 Iowans will find the premiums for individual health policies too expensive and will go without insurance next year.

“This is a national problem and congress needs to fix it,” Ommen said.

Forty percent of the counties in America will have just one insurance company offering individual policies in 2018. Reynolds contends “Iowa is the first state of many” that will face the collapse of its individual insurance market.

“One-size-fits-all is not the answer,” Reynolds said. “We had a robust market. We had low premiums. We had a great individual health care market and then they came in with a one-size-fits-all ACA/ObamaCare and it tanked.”

Congress has had plenty of time to  address the shortcomings in the federal health care law, according to Reynolds.

“We need them to do what they said they were going to and we need them to ‘repeal and replace’ (ObamaCare),” Reynolds said, “and give some flexibility back to the states.”

“The enrollment date is November 1 and I have to, at some point, make a decision to start to give some stability to Iowans so they know how they can move forward,” Reynolds said.

Reynolds is heading to Washington, D.C. tomorrow to meet with Vice President Pence, other Trump Administration officials and Iowa’s congressional delegation to discuss the insurance issue, along with others.

The majority of Iowans who’ll buy individual plans under Affordable Care Act rules will get a federal subsidy. Reynolds told reporters it’s unclear what several thousand other Iowans will wind up paying, so it’s too soon to come up with another alternative.

“We’re looking at any and every option that we can,” Reynolds said.

But any option must get a federal waiver and Iowa officials must navigate the same process they abandoned today when their original plan was withdrawn.

Democratic gubernatorial candidate Nat Boulton issued a written statement, saying Reynolds “failed to protect thousands of Iowans from skyrocketing premiums…at a time when her party fully controls both the Iowa and the federal governments.” Janet Petersen, the new leader of Democrats in the Iowa Senate, accused Republicans of doing “everything possible to undermine ObamaCare” and failing “to provide a workable, bipartisan alternative to help Iowans.”

Troy Price, the chairman of the Iowa Democratic Party, said in a written statement that Reynolds had “pulled the plug on Iowans’ healthcare today, choosing to put political attacks ahead of solutions for the people of our state.”

Carlos Cruz, a spokesman for the Republican Party of Iowa, emailed a statement with the following headline: “Obamacare Albratross Continues to Haunt Iowa.”