You are here: Home / Agriculture / Harvest still behind with yields looking better than expected 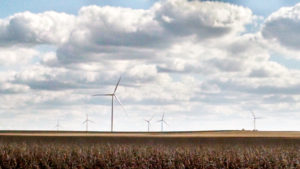 The harvest progress last week, but still remains well behind.

The warm weather last week allowed farmers to get in a lot of combine time as the corn harvest moved ahead by 10 percent and the soybean effort by 29 percent.

State Agriculture Secretary Bill Northey says after worries about a late start and drought, farmers have been seeing some good things. “For the most part yields have been good. Most of the folks have been happy,” Northey says.

He says some farmers are seeing better yields than they figured to have a few months ago. “Even those area that had a real dry part of the summer…their yields are definitely down from last year. But they may be better than what they thought they would be going into harvest,” Northey says. “Our yields have been good in northwest Iowa as well, harvest has been moving along. Thank goodness we had a dry week last week.”

The U.S.D.A. crop report Monday showed that 23 percent of the corn crop has been harvested — which is the smallest percentage by this date since 2009 and more than two weeks behind average. The bean harvest moved to 61 percent — but is also the smallest percentage harvested by this date since 2009. Northey says cooler weather doesn’t help with drying the crop — and as we head into the last full week of October — the urgency increases for farmers with crops still in the fields.

“We all look around the corner, we know November is coming. We all remember that a couple of decades ago there was a Halloween storm that buried a lot of crops out in the field, and folks have that in their mind, and the clock is ticking,” Northey says. “So, there are folks who will spend a lot of hours (in the field) when it finally gets fit.” When the harvest conditions are right you can see combines crisscrossing the fields day and night.”

“We hope that they’re all safe and certainly everybody out on the gravel roads and the highways needs to watch for that farm equipment,” according to Northey. “They’re working hard and sometimes it’s hard to be able to see some of the other traffic that is on the road as well.”

Northey farms near Spirit Lake and says he’s gotten all his beans harvested, but not the corn.