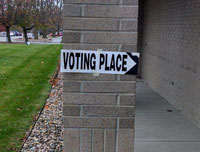 Votes have been cast by more than 86 percent of the 33,000 state and local government workers who are deciding whether they wish to have union representation in their workplace.

A new state law requires these “recertification” votes for union bargaining units in government workplaces before contracts talks may begin. This month, workers in 477 bargaining units have been voting and the two-week voting period ends at 1 p.m. today.

The voting has been done electronically, either online or by phone. The phone system, however, crashed for 12 hours late last week. It happened at about 9:30 Thursday night and wasn’t corrected until about 9:30 Friday morning. State officials say 36 employees tried to vote by phone during the outage. By Sunday night, about a third of them had called in again and recast their votes.