You are here: Home / Fires/Accidents/Disasters / Thousands of chickens die in fire near Charles City 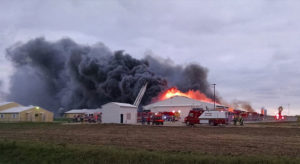 Some 6,000 chickens died in the fire at the Zoetis plant near Charles City.

A fire in northeast Iowa Monday night killed thousands of chickens and destroyed a business that opened earlier this year.

“Between Zoetis personnel and ourselves, the fire department was able to make a determination that the cause of the fire was an electrical malfunction within the building,” Whipple said. 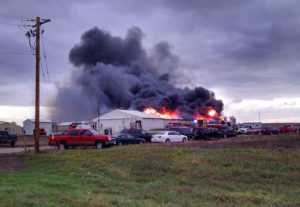 Six-thousand chickens were lost in the fire. The Zoetis plant opened in March and produced medicines for animals.

“The total loss in value, according to a Zoetis representative, was right around $3 million in property and contents,” Whipple said. Nobody was in the building when the fire started.

Whipple said crews had some trouble bringing the fire under control because of high winds and the rural location. There are no fire hydrants outside the city limits.