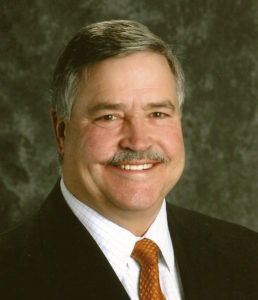 Reynolds will name Northey’s replacement soon after Northey’s wins Senate confirmtion for his new federal job. “I don’t anticipate Governor Reynolds would appoint me, period, so I’ve made the decision,” Lang told Radio Iowa. “As soon as Bill is voted affirmatively in the US Senate, I’m going to start my campaign.”

That means Lang will likely face a GOP primary in 2018 against the governor’s choice for state ag secretary. Lang wants to spark a statewide conversation about diversity in agriculture, rather than relying primarily on corn and soybean production.

Lang said alternative crops can boost the rural economy and give more young people a reason to live in rural Iowa. Lang, who is 66 years old, farms with his two sons, a brother and his 91-year-old father.

“We milk around 650 cows three times a day. We have a small cow-calf operation with about 50 cows and calves and we farm around 1200 acres,” Lang said. “We have corn, soybeans, alfalfa, pasture and cover crops.”

The milk from their farm near Brooklyn is sold to a dairy in Newton where Maytag Blue Cheese is made. Lang’s family plants cover crops on soybean ground and in fields right after corn silage is harvested. About 600,000 acres of Iowa farmland is seeded with cover crops today. Lang said, as state ag secretary, he’d like to set a goal of having cover crops on five million acres.

“We can improve the water quality of the state,” Lang said. “We can retain the nitrogen and the phosphorus because of less erosion.”

And Lang said the science now shows soil health improves when cover plants like rye are used and it improves the yields from traditional crops planted on the same ground.

Lang was the Iowa Farm Bureau Federation’s president from 2001 through 2011. He also served as president of the board that governs the state universities, but Democrats in the Iowa Senate refused to reconfirm Lang to that post after the conflict about the Tom Harkin Institute for Public Policy at Iowa State University. The institute is now located at Drake University.