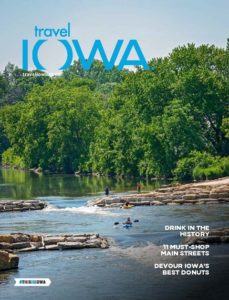 The cover for the 2018 Iowa Travel Guide

An attraction on the Maquoketa River that opened three years ago will be featured on the cover of the 2018 Iowa Travel Guide. Voters, in an online contest, selected the image of the Manchester Whitewater Park for the front of the guide that’s distributed annually to travelers from every state and around the world.

The attraction in Manchester opened in 2014 and is now one of three whitewater parks in Iowa. The others are in nearby Charles City and Elkader. According to Vick, they’re attracting kayakers, canoeists, rafters, tubers, and boogie board/surfers from near and far. “We have visitors from a number of different states, not only ones surrounding us, but also the coast. We’re seeing more and more people coming into town,” Vick said.

The Manchester Whitewater Park is roughly 800 feet long and features six 18-inches drops. It’s free and open to the public. “It’s a river. What we’ve done is just converted how that river is used,” Vick said. “We’ve put some drops in there to add some excitement, but what it also does is provides some water quality and fish passage. We’re seeing more environmental aspects of it that have improved as well.”

The 2018 Iowa Travel Guide will be available in late January. It highlights the state’s top tourist spots and events. The Iowa Travel Guide Cover Contest began on October 18 and concluded this week. The winning cover was announced Wednesday at the Iowa Tourism Conference in Sioux City.

In total, more than 5,300 votes were cast with the Manchester cover receiving 37-percent of the vote. Other images under consideration showcased Gray’s Lake in Des Moines, the Loess Hills in western Iowa and downtown Mount Vernon.