You are here: Home / Agriculture / Iowa woman in the running for top FFA award 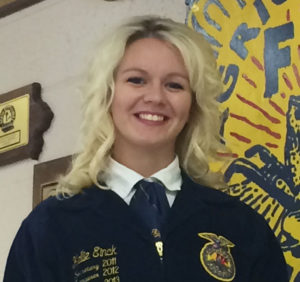 A woman who’s been a mechanic at a John Deere dealership in northwest Iowa for the past three years is one of four finalists for a national honor.

Kellie Einck, a 2014 graduate of South O’Brien Community School, is nominated for the National Future Farmers of America’s “Amercan Star” award for her work.

“I started working at Randy’s Service in Primghar, a little car garage, doing oil changes, tires, small brake jobs — stuff like that,” she says. “I went to diesel school in Sheldon at Northwest Iowa Community College…and then, two days after graduation, was hired full-time at Icon Ag and Turf, so I’ve kind of evolved from grocery store to John Deere tractors.” 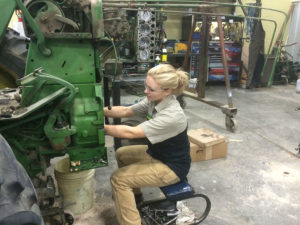 Einck, who is 22 years old, works on tractors and combines at the dealership in Paullina and admits she often gets strange looks from the farmers who see a woman working in the machine shop. The “American Star” is the highest honor within the FFA. Each year four are awarded.

Einck and this year’s other “American Star” nominees will be interviewed today and tomorrow in Indianapolis.

“They want to see your passion and your growth in your industry and the evolvement to where you started to where you are now,” Einck says.

The four “American Star” winners will be announced Thursday evening at the F-F-A’s national convention.

Einck grew up in Primghar and joined FFA when she was in high school to explore her fascination with how engines worked.