You are here: Home / News / Snow & wind chills in the teens likely by Friday night 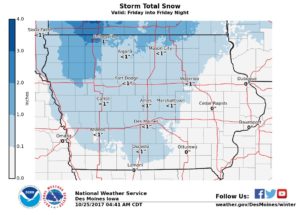 The coldest weather of the season so far is expected this weekend and it should bring Iowa its first snowfall of the season.

While high temperatures may reach into the 60s today, forecasters say we’ll be in the low 30s — or colder — by Friday night.

Meteorologist Cory Martin, at the National Weather Service, says most of western, central and northeast Iowa will get at least a dusting of snow, perhaps a half-inch or more.

“As you get closer to the Minnesota border, you may see amounts a little more than an inch, mainly on grassy surfaces,” Martin says. “With how warm the ground is, it’d really have to come down for us to see too much of an impact on roadways, although we can’t rule out a few scattered slippery spots as we get close to Minnesota.”

The snow’s predicted to start falling late Friday and may continue into Saturday morning. It may seem a bit too soon to have flakes flying before trick-or-treaters hit the streets, but he says we’re essentially on schedule.

“We’re getting into the time of year where we typically see our first snowfall,” Martin says. “It might be a little earlier than normal but certainly not unusual to see at this time of year.”

A pre-Halloween snowfall hit 20 years ago on October 25th and 26th. It followed a particularly warm fall and many trees were still fully leafed out. The wet, heavy snow caused widespread tree damage as the leafy limbs collected the snow and snapped. Power outages were also widespread. Martin says he’s -not- expecting a repeat of that 1997 event.

“This system coming through, while it’s going to have quite a bit of cold air, there’s not going to be a whole lot of moisture for it to work with,” Martin says, “so we’re not anticipating seeing any heavy precipitation totals in our area that would cause any sort of damage or effect the power grid.”

Very cold weather will be here soon and Iowans will likely need to get out their winter coats, hats, scarves and gloves.

“This is going to be the coldest air we’ve seen so far this season,” Martin says. “There’s going to be quite a chill in the air, especially Friday night into Saturday morning. We’re looking at wind chills dropping into the teens and low 20s. It might be a shock to the system to some.”

Any snow that falls Friday and into Saturday likely won’t stick around long as temperatures should warm into the 40s for much of Iowa on Sunday.