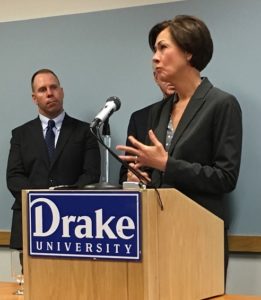 Republican Governor Kim Reynolds today said legislators should “explore” passing a law that would shield drug users from prosecution if they seek help for someone who’s overdosing. Three dozen states have enacted some form of a so-called “Good Samaritan” law.

“This law immunizes other drug users from criminal prosecution if they call 911 when an overdose is occurring,” Reynolds said during a midday news conference.

Reynolds hosted a forum on the opioid crisis today. Reynolds told reporters afterwards that she wants to see more doctors use the state’s prescription drug monitoring program, but she’s not yet calling for a law that would require participation.

“We’ll work with the Iowa Board of Pharmacy and stakeholders to help improve participation in the program and identity ways to automatically notify prescribers and pharmacies when patients are exceeding reasonable doses,” Reynolds said.

Just 43 percent of the Iowans authorized to write prescriptions for opioids and other medications use the program today. The nine-year-old state system that monitors prescriptions and sends alerts about potential abuses is getting an upgrade in the next few months.

“Modernizing the way that we use technology is critical to combatting this deadly epidemic,” Reynolds said.

Reynolds indicated state officials will encourage doctors to follow prescribing guidelines for opioid pain medications, but the governor opposes a new law that would limit how many pills doctors can prescribe at one time.

The governor expects use of the statewide prescription monitoring system will grow after the technology is upgraded. Reynolds has declared this Opioid Awareness Week. She toured a substance abuse treatment program in Dubuque on Tuesday. The governor’s visiting a health center in Corydon this afternoon and a hospital in Keosauqua tomorrow.

This morning, Reynolds invited someone battling a drug addiction to tell his story at her public forum in Des Moines.

“There are opportunities to turn your life around and to find a better life,” Reynolds said. “And it’s really important that when an individual understands that they want to get healthy, they want to get better, when they’re at that point in the addictive process, that they have access to a support system that can really help through a very difficult, difficult journey.”

Reynolds has talked publicly about her own battle with an addiction to alcohol. Her 2018 reelection campaign has released a video in which the governor credits her family for supporting her as she chose sobriety.