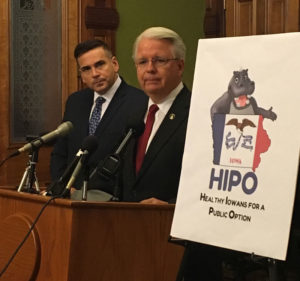 Two Democrats in the Iowa legislature are proposing that Iowans be allowed to pay a premium to the state and get the same coverage Medicaid patients get today. This “public option” is similar to a plan endorsed by the Nevada legislature, but rejected by that state’s Republican governor.

“The work really starts now for us because we have to go out and sell this to Iowans,” said Democratic State Representative John Forbes of Urbandale, a pharmacist.

Forbes is one of the Democrats proposing Iowa adopt something like Nevada’s idea. Forbes said premium costs aren’t yet calculated.

“We’re here to help find the solution,” Forbes said during a statehouse news conference. “We don’t have all the answers right now and that’s why most likely in the next week or two we’re going to go out on the road and we’re going to talk to Iowans, let them hear from us…to try to see if we can perfect the bill, make it better.”

“We’ve all watched congress dither, delay and fail at the efforts towards improving our health care system,” McCoy said.

“If Governor Reynolds is politically aware and is hearing from the same people that we’re hearing from, she can’t go into the next election without proposing to change the system,” McCoy said.

House Speaker Linda Upmeyer — the top Republican in the legislature — said the two Democrats are offering a “half-baked…political ploy” that hasn’t worked “even…in the most liberal states.”

Brenna Smith, a spokeswoman for Governor Reynolds, dismissed the Democrats’ proposal as a “sugar pill” that provides “no relief” to the 22,000 Iowans facing the dilemma of having only one company offering individual insurance policies for 2018. Medica premium hikes for that group may go up as much as 69 percent.

Governor Reynolds recently withdrew the State of Iowa’s stop-gap plan to try to lower those premiums, saying “Obamacare is stifling states’ ability” to come up with alternatives.

(This posted was updated at 1:37 pm with additional information)