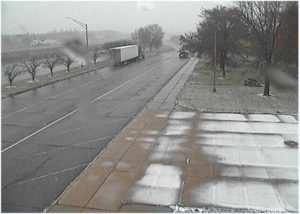 DOT traffic cam showing snow at a truck parking lot along I-35 near Clear Lake.

Flurries are flying this morning in many parts of Iowa but forecasters say the flakes likely won’t be as widespread as first thought.

Meteorologist Kurt Kotenberg, at the National Weather Service, says a Winter Weather Advisory is posted for Kossuth, Winnebago, Worth, Hancock and Cerro Gordo counties. He says they’ll likely get the worst of this pre-winter storm.

“Overall amounts should be on the lighter side, we’re thinking around one to two inches here in Iowa,” Kotenberg says. “I don’t really think the snow is going to make it as far south as Highway 30. It’s all going to be in north and northeastern Iowa.” It’s the first measurable snowfall of the season and drivers may need to take it particularly easy on the roads, especially the closer they are to the Minnesota border.

“Wind gusts will remain in the 25- to 35-mile-an-hour range with gusts of 40 to 45 occasionally up across those northern counties,” Kotenberg says. “When you have the snow and you have those very strong winds, you could have reduced visibilities.” Temperatures are already topping out for the day in the 30s, with wind chills in the teens and 20s, and he doubts conditions will improve.

“Pretty much what you see is what you’re going to get all day,” Kotenberg says. “Maybe we’ll warm up a couple of degrees in the afternoon but it’s going to be pretty windy all day long.” It’ll be even colder tonight, with air temperatures across western Iowa in the low 20s, with central and eastern Iowa reaching into the mid to upper 20s. Gardeners across Iowa are on red alert to save their plants this afternoon.

“We do have a Freeze Warning out for a good chunk of Iowa,” Kotenberg says. “Tonight, the temperature will be falling below freezing for a widespread part of the state so it’s going to be chilly out there. Cover any tender vegetation or bring it in if you want to keep it.”

Any snow that does fall will likely melt quickly as temperatures are expected to climb into the 40s on Saturday or perhaps Sunday.