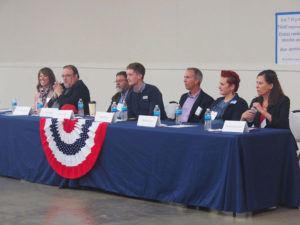 All seven Democratic candidates running in the third congressional district who hope to face Republican Congressman David Young in 2018 gathered this weekend at a forum in Clarinda.

“Only about half the people in America even have internet that is considered adequate,” D’Alessandro said. “…It is a New Deal approach to a New Deal type of problem. Who knows better than rural America how that kind of approach can actually make a different and actually work?”

Candidate Theresa Greenfield of Des Moines is president of a family owned real estate firm. She said rural America must be included when federal investments are made in infrastructure, the “green economy” and education.

“Working families, they want to make more money,” Greenfield said. “They want a well-paying job for a job well done and we can help with that by investing in education — better skills, better jobs to get their American dream.”

“I think economic concentration is the issue of our time,” Frerick said. “…The Koch brothers are modern-day ‘robber barons’. I love saying that ’cause everyone’s heads knod because it makes sense. We are living in a second guilded age.”

Candidate Eddie Mauro of Des Moines is a former teacher and coach who founded an insurance company. Mauro said Democrats need to pick a candidate who appeals to rural voters in the district with ideas for boosting the bottom line for current and new farmers.

“Hearing a lot of great stories and great ideas tonight,” Mauro said, “but none of that makes a difference if we don’t have the right kind of candidate with the right kind of message to beat David Young, who’s been very difficult to beat the last two times out.”

Third district congressional candidates Cindy Axne; Paul Knupp, Junior; and Heather Ryan also spoke at the Saturday evening forum in Clarinda. Four of the seven Democrats who are running for governor also appeared at the event. The forum was sponsored by Democrats in five southwest Iowa counties.