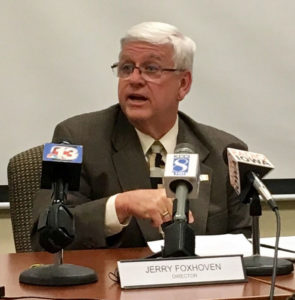 One of the three private companies involved in the management of Iowa’s Medicaid program is pulling out. AmeriHealth Caritas had been managing care for about a third of Iowa Medicaid patients.

Iowa Department of Human Services director Jerry Foxhoven this afternoon announced the state will try to find a new company to replace AmeriHealth.

“Just because I have a problem with my iPhone doesn’t mean I got back to my rotary land-line, you know,” Foxhoven said. “We’re committed to managed care. It’s the right thing. It’s the right way to both provide good health care services and keep it sustainable in the long term.”

The 200,000 Iowans who’re immediately impacted by this latest change, though, will get a letter in the mail and a new insurance card — switching them from AmeriHealth to one of the two remaining companies. AmeriHealth will stop managing care for those patients on November 30.

Foxhoven has been negotiating new contracts with the three managed care organizations since he started as DHS director in June.

“Really, from the very beginning, I’ve said: ‘If we keep all three. Terrific. If we can’t keep all three. That’s o.k. We’ll find somebody else to fill in that gap,'” Foxhoven told reporters this afternoon. “And that’s what we’re going to do.”

The companies reportedly had been complaining the costs of care for Medicaid patients in Iowa had exceeded their initial estimates. Democrats in the legislature say today’s announcement that AmeriHealth is pulling out of Iowa’s Medicaid program is evidence the move to “privatize” Medicaid “is a complete disaster.”