You are here: Home / News / Reynolds says it’s up to all of us to end ‘vicious’ political discourse (AUDIO) 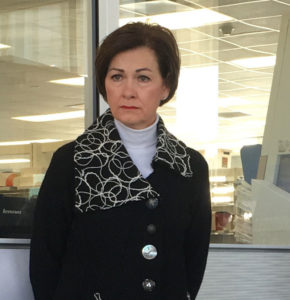 “I’m the governor of everybody, so I want to make that clear,” Reynolds said, “but I’m probably talking about a very small, minute population.”

Back on October 21, Reynolds told a crowd that she and her fellow Republicans needed to “double-down” because of what she’s seen as she travels the state.

“The liberals are unhinged and they are out for us,” Reynolds said at a fundraiser for her 2018 gubernatorial campaign.

During her weekly news conference today in Ames, Reynolds was asked what incidents may have occurred to lead her to reach that conclusion. Reynolds said there’s more than one, but cited as an example negative comments on social media about two of her grandsons after she posted a photo of the boys.

“I signed up for this. You can come at me all you want. I’m tough. I know what this job entails and I guess, in some sense, my family did, too, but not to that extent,” Reynolds said. “This is a six-year-old little boy and his brother, playing soccer on a football field and to me, that’s unhinged. That’s over-the-top and they don’t deserve it.”

Reynolds said “all of us” should take steps to improve the political climate.

Tess Seger, a spokeswoman for the Iowa Democratic Party, said it’s “unfortunate” the governor chose to the word “unhinged” to describe a “wide swath of Iowans” 11 days ago, but Seger said Democrats “respect the office and strongly condemn any threatening comments directed at her family.”