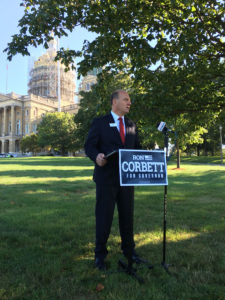 “As you may know, Bill Northey’s nomination to the U.S.D.A. is being held hostage by ‘big oil’ interests in some sort of political payback,” Corbett says in a recorded a phone message that’s being sent by an automated system to thousands of Iowans.

Corbett recites the office phone number for Texas Senator Ted Cruz — who is blocking a senate vote on Northey’s nomination.

“If you’re like me, you’re sick and tired of the dysfunction we have in politics. When a good, qualified and honorable man like Bill Northey is being held up, the DC swamp is winning,” Corbett says in the recording. “Join me in calling US Senator Ted Cruz and tell him to stop the political games and let Bill Northey’s nomination go through.”

Governor Reynolds told Iowa reporters she is disappointed in Cruz’s action, but will rely on Iowa Senators Chuck Grassley and Joni Ernst to lobby Cruz directly.

Cruz has told reporters in D.C. that he’s waiting for the Trump Administration to meet with him and other oil-state senators. Cruz and eight other senators from states with oil refineries want to air their concerns about the federal production mandates for ethanol and biodiesel. Last month 30 Midwestern senators successfully pressured the EPA’s administrator to back off a plan that may have reduced the biofuel production mandate.