You are here: Home / Health / Medicine / King holds hearing on his ‘Heartbeat Protection Act of 2017’ 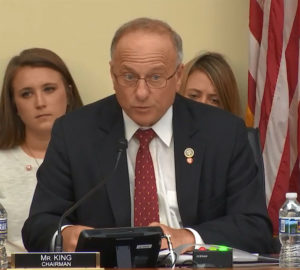 Congressman Steve King makes a statement during the hearing.

Republican Congressman Steve King is holding a congressional hearing today on a bill he’s sponsoring that would ban abortions if a fetal heartbeat is detected.

“At what instant does life begin? Science cannot precisely pinpoint the instant of conception,” King said, “but the ultrasound proves beyond any doubt that life is present every time there is a heartbeat.”

King’s bill would ban all abortions after the sixth week of a pregnancy. During an opening statement at the hearing, King said it is “decades past” the time to overturn Roe v Wade, the Supreme Court decision that legalized abortion.

“It is important that congress passes such a strong pro-life bill now because President Trump will hopefully appoint one or two more justices to the Supreme Court, making this a profound moment in the pro-life movement,” King said. “President Trump is actively changing the make-up of our judicial system with strong conservative nominees who would hear arguments about this bill while it is being challenged on the way to the Supreme Court.”

A Democratic congressman who spoke at the hearing called the bill a “direct attack” on a “woman’s constitutional right to choose.” Last year the U.S. Supreme Court refused to review a lower court’s ruling that overturned the North Dakota law that sought to ban abortions after detection of a fetal heartbeat. The federal courts have also blocked an Arkansas law that would have banned abortions after 12 weeks of a pregnancy.

Current Iowa law — enacted this past May — bans most abortions after the 20th week of a pregnancy.