You are here: Home / Crime / Courts / Slain central Iowa police officers remembered on the anniversary of their deaths 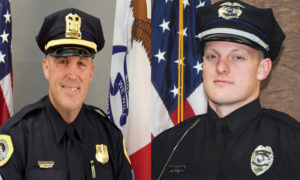 Today marks the one year anniversary of the shooting of two central Iowa police officers, who were ambushed and killed without warning.

Urbandale Police Officer Justin Martin was shot around one A.M. and 20 minutes later Des Moines Police Sergeant Tony Beminio was shot to death as he responded to the first shooting.

Martin was 24 and Beminio was 38. Des Moines police chief Dana Wingert was visibly angry as he spoke to reporters about the shootings at police headquarters. “What happened yesterday was calculated murder of two law enforcement officers, plain and simple, that’s the reality,” Wingert said.

The chief said the ambush style killings were not something that is normal. “It was a cowardly act of calculated murder, and unfortunately we all as a community, as police departments, as families, we are all left to deal with the aftermath,” Wingert says. “That’s not typical to Iowa, that’s not typical to our communities and we know that. And we appreciate the outpouring of support.”

Thousands of law officers and friends and family turned out for the funerals of the two officers in the proceeding days. Chief Wingert delivered the eulogy for Sergeant Beminio and ended with an emotional statement.

“God sent Sergeant Anthony Beminio and we’re all better for it and now his time of service is ended and God has called him home. I am absolutely heartbroken. God bless Tony Beminio,” Wingert said. Officer Martin’s funeral followed in his hometown of Rockwell City.

Brady Farrington grew up with Martin grew in the Calhoun County town and talked about their journey that led both to join the Urbandale Police Department. “As my brother in blue with the Urbandale Police Department we became friends on that journey. Experiencing life together where a small town little boy had big dreams. And he became a kind-hearted gentle giant, living them out every single day,” Farrington said.

Police arrested then 46-year-old Scott Greene of Urbandale eight hours after the shootings and charged him with murdering the two officers. Greene eventually pleaded guilty and was sentenced to two consecutive terms of life in prison.

Martin was the first Urbandale officer to die in the line of duty. Many memorials have been dedicated in his honor since his death.  Beminio’s death came as the Des Moines department was still dealing with the deaths of two other officers who were killed in an accident with a drunk driver. The spokesman for the Des Moines Police Department says officers are marking the anniversary of Beminio’s death privately at the department.