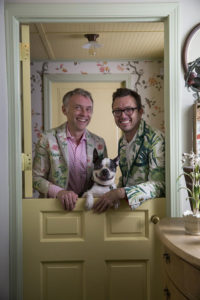 An Iowa native is one half of the interior design duo that’s headlining this weekend’s first-ever Des Moines Holiday Boutique.

Nixon says changes don’t have to be expensive or radical to make a positive difference in your space. He suggests starting small, changing out accent pillows or window treatments or just getting new bed linens that make a bolder statement.

“It’s the idea that good designs should be accessible and fun,” Nixon says. “We both had grandparents where you couldn’t go into the living room. I had Italian grandparents where you stuck to the plastic-coated seat coverings. That’s not how we live today. It’s an idea that creating an environment that’s sophisticated and fun and that puts a smile on your face.”

The Des Moines Holiday Boutique runs today through Sunday at the Iowa Events Center and features more than 200 companies and vendors. Loecke and Nixon are making appearances each of the three days.