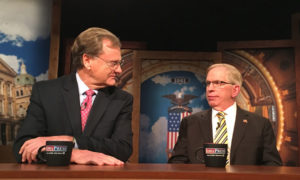 A long-time Iowa GOP insider expects the state party to eventually rewrite its rules so members of the Iowa GOP’s governing board can endorse President Trump’s bid for a second term.

Steve Scheffler, one of Iowa’s representatives on the Republican National Committee, is also president of the Iowa Faith and Freedom Coalition.

“Of course, anybody can run, but I fully expect the Republican Party — the whole state central committee and the Committeeman and the Committeewoman — to be fully behind our president because he’s done a great job…I fully expect our team to be on board and quite frankly, if Iowa wants to maintain our first-in-the-nation caucus status, we can’t have people wandering off and supporting other candidates,” Scheffler says. “That’s the bottom line.”

Members of the Iowa Republican Party’s governing board agreed to remain neutral and not endorse a candidate in the lead-up to Iowa’s 2016 Caucuses. Trump already held a campaign-style rally in Cedar Rapids this past June. The Iowa GOP’s chairman said at the rally he was tired of Trump critics like Nebraska’s Republican U.S. Senator Ben Sasse and suggested Sasse should stay on the Nebraska side of the Missouri River. Doug Gross, the Iowa GOP’s 2002 candidate for governor, says he’s concerned party leaders are discouraging candidates who might challenge Trump in 2020 from campaigning in Iowa.

“We should never be in a situation where we don’t invite people into our borders to talk about the future of our party and the future of our coumtry because that’s the nature of Iowa. Everybody gets that chance to speak up,” Gross said. “Frankly, when a party chair of ours tells a neighboring senator not to step foot in our state, that hurts our ability to retain the Caucuses, in my opinion.”

Scheffler is a member of a national group examining the sequence of presidential caucuses and primaries in 2020 and he disagrees. Scheffler says Sasse is “obsessed” with attacking Trump.

“Mr. Sasse invites it upon himself and if he can’t behave himself and get with the Trump agenda and start attacking the left instead of attacking our president, then he has what he has coming to him,” Scheffler says.

Having an incumbent president in the White House makes the Iowa Caucuses “a whole different ballgame,” according to Scheffler and Scheffler says the Iowa GOP’s leaders shouldn’t apologize for standing with Trump. Gross says it would be a “big mistake” for the Iowa GOP to shut out Republican candidates who may challenge Trump.

“We are a party that should be able to listen to all voices,” Gross says. “This is not an autoritarian regime. This is a democracy and Iowa should be at the forefront of that.”

Gross and Scheffler made their comments during taping of “Iowa Press” which airs on Iowa Public Television tonight at 7:30.

Carlos Cruz, a spokesman for the Republican Party of Iowa, said while members of the state central committee may choose to endorse in 2020, “the party itself – the Chairman, Co-Chair, staff and party infrastructure – would remain neutral…The Republican Party of Iowa takes the first in the nation privilege seriously, and to that end would not spend money or take sides in a caucus it was charged with running impartially.”