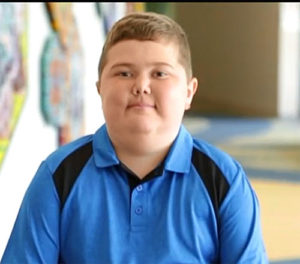 The kid captain for this week’s University of Iowa football game against Ohio State is Logan Manderfield of Waucoma.

Logan’s mother Lyndsey says he was diagnosed with Duchenne Muscular Dystrophy at five months old when he wasn’t able to walk. She says it affects around one in 135 boys, and while there are some girls who are affected, it mostly is found in boys.

Manderfield says the disease impacts her sons ability to move. “Duchenne causes muscle weakness, and it’s a progressive disease — which obviously means the older he gets the weaker he gets. It also not only affects his arms and legs, but the heart and lungs are muscles as well, so it’s muscle weakness that progressively gets worse over time,” she says. Lyndsey says the news was shocking to her and her husband Don, but she says their son has been an inspiration.

“He is amazing, he doesn’t complain, he isn’t negative about it. It is a challenge he has to deal with every day. He’s awesome,” Manderfield says. The family makes the two-hour drive to Iowa City once a month for tests, assessments, and an I-V infusion at University Hospitals. Lyndsey says they are participating in a clinical trial in hopes they can be part of finding a viable treatment for the terminal disease. She says Decorah native and Hawkeye linebacker Josey Jewel got to tell Logan he would be a kid caption and that was very special. All the kid captains got to spend time with the teams at an event in August. Now it’s the day for Logan to be in the spotlight.

She says they are invited to be there an hour before the 2:30 p.m. kickoff today and will be in the tunnel with the players before they come out. Logan will be honored as the kid captain when he comes out. Logan Manderfield loves sports and enjoys swimming and manages his school’s football, basketball, wrestling, and baseball teams.