You are here: Home / Education / U-I tries going tiny to improve on recycling across campus 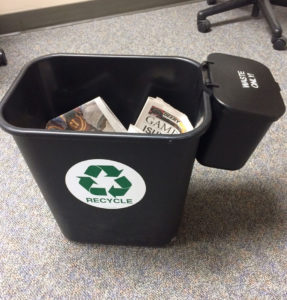 The big trash can is for recycleable materials. The tiny one for trash.

Sustainability advocates at the University of Iowa are hoping a program called “Tiny Trash” will have a big impact on the sprawling campus.

Beth MacKenzie, the U-I’s recycling coordinator, says the program is being introduced to more buildings each month at the Iowa City institution. Tiny Trash involves attaching a tiny trash can to the side of your current waste receptacle, which is then transformed into a recycling bin.

“It’s a small, little, mini trash can,” MacKenzie says. “The ones we use have a clip of sorts that clips to the side of the recycling bin. The recycling bin is your typical deskside-size bin and then the Tiny Trash just clips onto it.”

The Tiny Trash can is labeled “Waste Only!” and the larger bin to which it’s attached says “Recycling” and has the familiar green arrows forming a circle.

“Most of what people generate when they’re working at their desk or workstation is recyclable,” MacKenzie says. “There’s lots of paper, bottles and cans, that sort of thing, but they’re not typically generating a whole lot of trash so the recycling bin should be bigger in order to hold all of that material.”

MacKenzie says the U-I’s recycling program is already “pretty robust” but it can always be better. “We have a waste diversion goal at the university of 60% diversion from the landfill by 2020 and we’re currently at about 40%,” she says. “We’ve been stuck at that 40% for a few years now and we’re hoping this will sort of help boost our recycling rate.”

Custodians now empty most of the waste bins on campus, but with the new program comes new responsibility on behalf of each person who joins the Tiny Trash movement. Those users are required to empty both containers into centrally-located recycling and trash cans, which can be found in hallways, lobbies, or break rooms in most buildings.

Campus surveys find 72% report an “easy” or “indifferent” transition to Tiny Trash, while 83% report emptying their Tiny Trash twice a week or less.