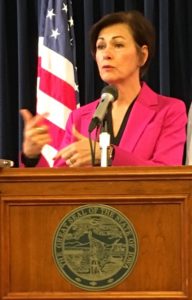 Governor Kim Reynolds today said she’ll ask the legislature to “address a loophole” that apparently has allowed two state officials to work as agents of a foreign government.

Kim Schmett – a former Republican candidate for congress – and his wife, Connie, were paid more than $100,000 by Saudi Arabia to lobby against a federal law that allows 9/11 victims to sue Saudi Arabia. Kim Schmett is chairman of the Iowa Employment Appeal Board and earns an $80,000 state salary. His wife serves on two other state boards, including one with veto power over hospital expansion plans.

The governor told reporters today that she lacks the authority to force the Schmetts to resign from the executive branch of state government.

“The Schmetts don’t serve at the pleasure of the governor. They serve a set term and that’s determined by statutue,” Reynolds said. “They were appointed by Governor Branstad and confirmed by the Iowa Senate and so what my staff has done is they have contacted the Ethics Board and have asked them to look into this matter.”

Reynolds said it’s unclear if the Schmetts violated any state laws by failing to disclose their lobbying contract with Saudi Arabia when they filled out financial disclosure forms required for their state roles.

“Legally, we don’t know if they’ve done anything wrong and that’s why we’ve asked a third party to review that and report back to us,” Reynolds said.

The couple co-hosted a fundraiser for Governor Reynolds several weeks ago. Reynolds said she had no idea at the time the two had been lobbying against 9/11 victims who were seeking the right to sue Saudi Arabia — and the governor told reporters she does “not agree” with the couple’s lobbying goal.

Reynolds said the Schmetts have donated $100 to her 2018 reelection campaign. She’ll decide whether to return the money after getting the Ethics Board report on whether the Schmetts broke any state laws or regulations by lobbying for Saudi Arabia. The Schmetts lobbying was first reported by www.28pages.org. The website’s mission statement says it’s aim is to “spotlight false pretenses, hypocrisy and misconduct in the war on terror.”

The Associated Press reported on the matter last week and Connie Schmett told the wire service she did the work not to gain money or fame, but to tell veterans the new federal law might expose the American military to foreign lawsuits.

Governor Reynolds made her comments this morning during her weekly news conference.