You are here: Home / Education / Half of Iowa districts met student achievement goals in 2016-17 school year 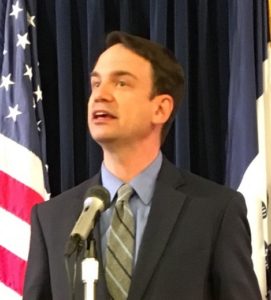 Officials say the state’s annual $157 million investment in a teacher improvement program is paying dividends in teacher retention and job satisfaction, but student test scores are not yet rising. Ryan Wise, director of the Iowa Department of Education, says more than 9000 Iowa teachers are getting bonuses to serve as mentors or “coaches” to other teachers in their school district.

“Student achievement has been largely unchanged to this point,” Wise says.

Wise says most educators see improvement in the professional environment in their school building and there are some gains in student test scores in individual school districts.

The state-funded teacher improvement program was phased in over three years. The 2016-2017 school year was the first time all 333 Iowa school districts were involved. Governor Kim Reynolds says during the last school year, there was a three percent gain in the number of students in kindergarten through third grade who met or surpassed reading proficiency goals.

“But, of course, like anything else, there is more work to do,” Reynolds says, “and our administration will continue to look for ways to ensure that teacher leadership and compensation is even more effective.”

Reynolds has a daughter who teaches and she’s serving as a teacher coach this school year. At the end of last school year, 85 percent of Iowa school districts said the program had helped retain teachers and attract new ones to their districts. Half of districts met their student achievement goals, according to the Iowa Department of Education. The American Institutes for Research found student scores on statewide assessment tests “remained largely unchanged” during the past three years.