You are here: Home / Fires/Accidents/Disasters / On front lines of disasters, Iowan directs help from Mercy Corps 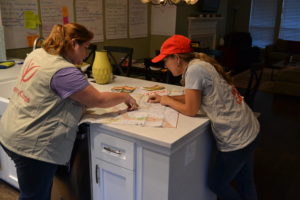 An Iowa native plays a key role in helping a global humanitarian aid organization respond to major disasters across the continent.

Jill Morehead is team leader of the Strategic Response and Global Emergencies division of Mercy Corps.

Morehead has been deployed to Houston, Texas as well as to Puerto Rico this year after the areas were devastated by hurricanes. She says basic necessities, like food and water, are still difficult to get in Puerto Rico.

“There’s three-point-four million people on the island of Puerto Rico which is more than the entire state of Iowa,” Morehead says. “So, it would be like if suddenly from today to tomorrow, there was no running water or electricity for the entire state.”

While the effort to restore power to Puerto Ricans is getting significant attention, she says clean, affordable water is a more immediate need.

“Like if all of a sudden tomorrow in Des Moines, your tap water stops running and you try to go to the store and they don’t have any,” Morehead says. “If they do have some you are limited to a 24-pack, how are you going to get enough water for your family?”

Morehead will speak about her work with Mercy Corps tomorrow on the Scott Community College campus in Bettendorf.