You are here: Home / Crime / Courts / Report: opioid abuse not the only growing drug threat in Iowa 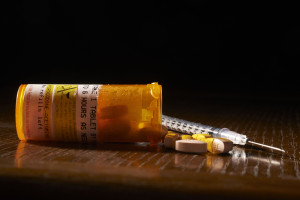 The opioid epidemic is making headlines across the country, but in Iowa, officials say they’re not losing sight of abuse of other drugs.

Steve Lukan, director of the Governor’s Office of Drug Control Policy, says methamphetamine trafficking in the state may be at an all-time high. “The purity in the last number of years has gone up while, at the same time, the price has become a lot less than what it used to be,” Lukan said. “So, it’s just a really powerful drug that’s out there today.”

Lukan’s agency has released an annual report that outlines the state’s drug threats. It shows in the last fiscal year over 46,000 people sought treatment for substance abuse in Iowa and those citing meth as their primary substance reached a record high level of nearly one-in-five (19.8%). Alcohol remains the most cited substance by those in treatment (45.2%) followed by marijuana (25.3%).

Lukan is disturbed by a survey that found one-fourth of 11th graders in Iowa “perceive no risk” in smoking marijuana. “We have a lot of concern about that because we know that can really get young people off on the wrong path. A very large percentage, 76-percent, of the young people who end up in drug treatment in Iowa are there because of marijuana,” Lukan said.

The report, called the 2018 Iowa Drug Control Strategy, highlights the many challenges the state faces with alcohol and drug abuse – in addition to some accomplishments. “We do feel like there’s been some good progress made. We’ve seen our state maintain one of the lowest levels of drug use in the country. We do see fewer young people engaging with alcohol and tobacco products. That’s been a really steady and remarkable decline,” Lukan said. Iowa’s overall rate of illegal drug use, at 6.27%, is second only to South Dakota’s 5.82%.

One major concern is fatal traffic crashes in Iowa involving drugs or drugs and alcohol combined rose to an all-time high of 84 last year. That topped the previous high of 72 alcohol and drug-related fatalities in 2005. “It’s the drunken driving like we’ve known about for many years, but at the same time, there’s more incidents of people using prescription drugs or other drugs and getting behind the wheel,” Lukan said.

There were 107 fatal crashes involving alcohol only in Iowa last year. That marked the highest total since 111 in 2007.

Iowa hasn’t been untouched by the opioid epidemic, far from it, according to the report. Opioid-related overdose deaths in Iowa rose to an all-time high of 180 in 2016.