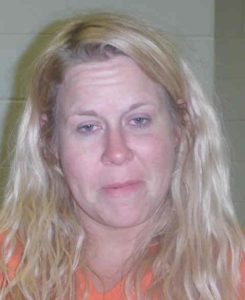 A Spencer woman who authorities believe was likely high on meth was nude when she got out of a moving vehicle and wandered through traffic yesterday afternoon.

Spencer Police got to the scene at about 5:30 Wednesday afternoon. Officers found 36-year-old Heidi Bern of Spencer in the street, naked, and they called for paramedics. Before the ambulance arrived, the police report says Bern “became combative and irrational and officers were forced to restrain her in handcuffs.” She was taken to the Spencer Hospital where she was treated and released.

Officers found Bern’s vehicle had come to rest on a sidewalk and there was no damage.

Bern has been charged with possession of meth, Interference with official acts, disorderly conduct and reckless driving. Authorities are awaiting lab results to determine if she’ll also be charged with operating a motor vehicle while under the influence.