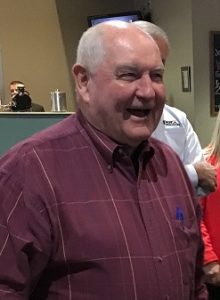 U.S. Ag Secretary Sonny Perdue says the renegotiation of the North American Free Trade Agreement may be a “bumpy ride.”

“This is not going to be a smooth negotiation,” Perdue said this morning. “I think you already see that. The United States…has brought some significant issues Mexico and Canada don’t like, but that’s part of the negotiation.”

For example, U.S. officials have reportedly proposed limiting Mexican truckers from making long-haul runs in the United States. NAFTA negotiators have been extended through March. The next round of talks among representatives of the three countries will begin later this month.

“I think we will get to a good agreement for American farmers and producers, but again, it may be bumpy in the meantime. There may be some speed bumps there that create anxiety,” Perdue said. “You know, farmers don’t need a lot to be anxious about in these kind of days of low commodity prices, so the administration, the president knows how important agricultural trade is, how important NAFTA has been to American agriculture, so I’m hopeful we will get a deal at the end of the day.” 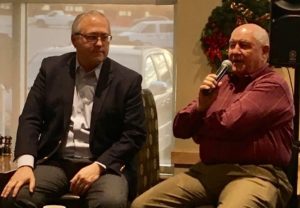 Perdue is making his fourth trip to Iowa since he was confirmed as U.S. Ag Secretary. He joined Republican Congressman David Young in Urbandale at 7 a.m. to visit about farm issues with a group gathered in a Hy-Vee restaurant. Perdue was asked about Iowa Ag Secretary Bill Northey’s nomination to be USDA Undersecretary for Farm Production and Conservation.

Texas Senator Ted Cruz is maintaining a block on the senate vote to confirm Northey for the job until he gets a meeting with President Trump to discuss the Renewable Fuels Standard. Perdue joked it’s been U.S. policy not to “negotiate with hostage-takers.”

Perdue later told reporters that was a joke, but he repeated his frustrations with the senate confirmation process.

“We need Bill Northey there. We’re almost 10 months into this administration and I need his leadership. We’ve got to get out here and deliver customer service to our farmers, to our FSA offices, our NRC offices and I just need him,” Perdue said. “It really is frustrating not being able to have our undersecretaries at this stage of the game.”

Perdue said “it is yet to be determined” what’s next for another Iowan who has been working in the USDA since President Trump took office. Sam Clovis has been the White House liasion with the USDA. Clovis withdrew his nomination to be the agency’s chief science officer last week.

“I think Sam made a very selfless, couragous decision when he realized that his situation was being drug into the whole Russia deal which has gone on way too long,” Perdue told reporters. “I think he didn’t want the president to be distracted in that way.”

Court records indicate Clovis was a Trump campaign supervisor to the Trump foreign policy advisor who pleaded guilty to lying to the FBI. In a statement, Clovis said the political climate in Washington has turned into a “blood sport.”

Clovis has been “very helpful” inside the agency, according to Perdue.

“We’re going to find an appropriate role for him. I think he’s got a lot of expertise and a lot of knowledge and a lot of relationship in agriculture,” Perdue said. “I regret that his career has been disparaged in such a way, but Sam’s going to be helpful to USDA.”

Over the noon-hour, Perdue will lead a roundtable discussion at the central Iowa headquarters of an agency that sells crop insurance. USDA officials say the topics will be agricultural taxes and risk management tools.