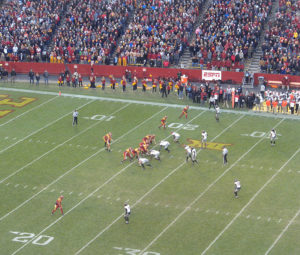 A jump ball on an Iowa State pass into the end zone was ruled an interception and upheld on review, ending the Cyclones’ attempt to tie the game and they fell to Oklahoma State Saturday 49-42 in Ames.

The Cowboys scored with 5:55 to play and made a two-point conversion before going ahead on a touchdown pass with 3:47 to play. Then with less than a minute to play, ISU receiver Marchie Murdock tried to pull the ball away from OSU defender A.J. Green on the pass to the end zone before it was ruled an interception. 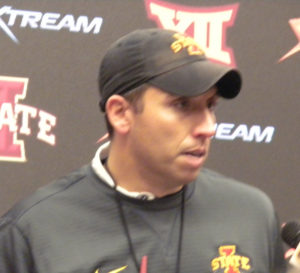 “It’s a gut-wrenching loss and it’s not easy, but college football isn’t easy. And so, it’s a game of inches and our job is to win the inch and we came up a little bit short today. Give credit to Oklahoma State, they obviously are a really good football program,” ISU coach Matt Campbell said.

Murdock later tweeted that “They robbed me” about the call by the officials.  Murdoch was not available for reporters after the game.

Campbell said in his post-game news conference that he did not get an explanation from the officials on the call. “I think they felt like he had possession of it (the defender) when they came down on the ground,” Campbell said. “It’s one of those bang-bang calls, and I can sit here and we can complain about it and whine about it, but that’s not who we are, that’s not what we do. I’m sure there’s a million different plays that we could have made in the game to not be put in that situation.  They’ve got a tough job and that was a tough situation.”

The final pass was thrown by redshirt freshman quarterback Zeb Nolan, who was press into service after starter Kyle Kempt went out in the second quarter with an injury.  Campbell says he felt confident Nolan would be ready.

Campbell said he saw the greatest majority in Nolan after Kempt was named the starter over him earlier this season when Jacob Park went out. He said Nolan could have been upset, but took on the challenge of being ready. “And you saw his growth in practice at an astronomical rate.”

The Cyclones were trying for their third upset of a ranked opponent and were trying to stay in the hunt for a conference title. Campbell believes the team will bounce back and finish the last two games strong.

“They understand that there’s a lot of things out there for these guys to play for,” according to Campbell. “and this is a group of seniors who has demanded that of everybody on the team and in the program. It won’t be easy, but college football isn’t easy. The flip would have been you won, and all of a sudden you have to go on the road and play a big game. It is what it is.” 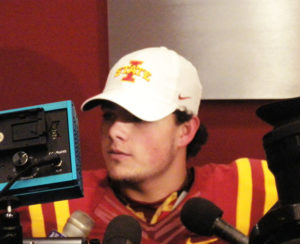 Nolan talked about getting the call on the sideline to go into the game. He said Kempt went off the field for a time and he was prepared to go in then and then Kempt came back, so he was ready to go in whatever happened.

Nolan said he is close to Kempt as his roommate and has watched how he prepared and did the same to get himself ready. He led the Cyclones on a 91-yard scoring drive the first time he came in. He said he felt good after completing his first pass and that allowed him to overcome any nerves and settle in.

“I try to go out there and execute what they ask me to do. I don’t try to do too much or too little, I just know that they are going to call the plays that I like and just roll with it that way,” Nolan said. Nolan expects the team to bounce back and says the seniors deserve a strong finish.

“That’s crucial, we’ve got to end the season on a good note, we just can’t be satisfied with going to a bowl, and be satisfied with where we are at now,” he said. “We’ve just get better and make sure that we leave these seniors not with the way they left Jack Trice today, but let them go out with a bang, because they really changed the program.” 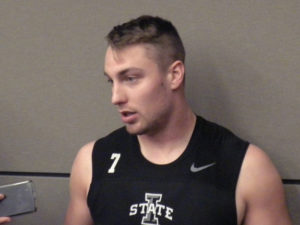 One of those seniors, Joel Lanning, praised Nolan for stepping in. He said Nolan’s performance was huge for someone who was playing in his second or third college game. Lanning also came up huge for the Cyclones on offense and defense.

Lanning started the game as middle linebacker and then came in  for a few plays at quarterback and ran for a touchdown and passed for one.

He said it was hard to process that this was his last home game. “From the spirit walk, the last time walking out there, to senior day — it’s been pretty crazy.  And then to go out like that in your last game is kind of rough,” Lanning said. Lanning’s 22-yard touchdown pass was to Allan Lazard, also a senior, who also caught Lanning’s first ever touchdown pass.