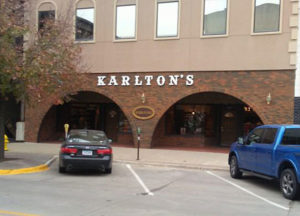 A Sioux City clothing store that has been a downtown fixture for nearly six decades will soon be closing its doors.

The co-manager of Karlton’s clothing store on 4th Street, Kim Kletschke, says he and his brother Kal are retiring.

“We’ve been thinking about it for a few years and kind of laying out the plans. It’s actually worked out to be kind of a perfect storm, because in our case we’ve got a bunch of lifers in here,” Kletschke says. “The least of our fultime people — including two tailors who came from Greece originally and are expert tailors — the least tenure is 33 years here.”

Karlton’s opened in 1960 when Kim’s dad started Karl’s Prep and Harvard Shop a block away (510 5th Street.) Kletschke says the store merged with another men’s store in 1972 at the current location on 4th Street.He says they had a dividing wall between the two with separate clientele.

They closed last Friday and are bringing in help to set up everything for the final liquidation sale when they open Thursday (November 16th).

“We’re chopping it all down, every piece is going to be low-balled. We’re going to be in putting sale tags on everything for five days,” Kletschke says. The last day of business is set for sometime in January. Kletschke says he and his staff have become close friends with many of their customers, and he’s thankful for their loyalty to the business over the last 57 years.