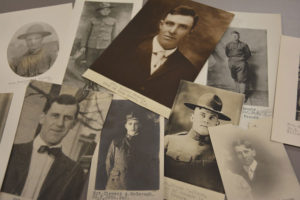 The State Historical Society is looking for help in identifying those from Iowa who died in World War I.

The State Historical Society of Iowa it is seeking your help in identifying the soldiers from our state who were the casualties of World War One.

“We have about 2,700 names and images from that total,” Morain says. “We are asking Iowans to help us out and fill in some of those missing pieces.” Morain says they are putting together and honor roll of those who lost their lives as part of the historical society’s ongoing commemoration of the 100th anniversary of America’s entrance into the war. That’s where you can help them fill in the blanks.

“We have a website where folks can check in and scroll through it and see who is on the list — and if anyone is missing form that list or if there are missing photos — those are the ones that we are really looking for,” Morain explains. The website is: iowaculture.gov/honorroll. He says if you look through the list and find someone you know is not there, you can send in their picture and information.

The names already on the list include Merle Hay of Glidden, who was among the first men to die, and Wayman Minor of Centerville, who was among the last soldiers to die in the war. The first U.S. woman to die during active service in the war was Marion Crandall of Cedar Rapids. The State Historical Society also has an exhibit called “Iowa and the Great War,” which Morain encourages you to see and learn more about the effort and sacrifices of Iowans.

“Both in the trenches and back here at home and how that war really shaped the way Iowa thought of itself and the sweep of history here in Iowa,” according to Morain. “So it’s a really interesting exhibit with lots of great artifacts that tell the story.”

The “World War I Honor Roll” with the photos and names of those who were killed in action, went missing, or died of disease, wounds or accidents, will go on display at the State Historical Museum of Iowa next year on Memorial Day weekend.